If not for Gary and Donald, there would be hockey tonight at the Coliseum -- in fact the Islanders and Rangers would have met for the first time this season--on the 33rd anniversary of one of their most famous games.

Last year, I started putting together an Isles "40 in 40" series -- maybe someday I'll even finish it.  Moment #26 dealt with this famous game...might we see another game anytime soon?  Who knows ...and I know a lot of people who are now saying...who cares.

But for now...enjoy this helping of Chili.  Double Chili, in fact.

For nearly 40 years the Islanders and Rangers have been delighting their fans with tremendous games against each other.  Moment #28 already dealt with Pierre Turgeon's 50th goal OT'ing the Rangers at Madison Square Garden, and you know that there will be Islander-Ranger playoffs moments to come later in this series.

The first was played on February 25, 1979 at Madison Square Garden.  That night a Denis Potvin hip check inspired a chant that remains three decades later. After the Islanders would clinch first place overall by winning at Madison Square Garden on the final day of the regular season that April, the Rangers upset the Islanders in a classic playoff series, winning game six on Garden ice.  (In some ways, the Isles were lucky to get this series to six games, winning twice in overtime.)

All of that is only background to Moment #25, which would be the first meeting of the teams after that playoff series. The Islanders struggled out of the gate the following season, and were below .500 (5-6-3) when they entertained the Rangers on November 13th. That game would produce two words that Islander fans would always remember: Double Chili.

In those days, the Islanders needed six goals to send their fans to Wendy's the next day for Chili. It didn't start out that way.  Steve Vickers scored first for the Rangers, midway through the first but Billy Harris and Bryan Trottier responded to give the Isles the lead later in the session.  A Don Maloney goal tied the game heading into the first intermission.

The second period though was all Islanders. Trottier scored three minutes in and when Mike Bossy and Denis Potvin scored 12 seconds apart, the rout was on. Wayne Merrick scored the Chili goal 7 1/2 minutes into the period and by the time the session ended Billy Harris (shorthanded) and Stefan Persson had made it 8-2 in favor of the Isles. As it so happens, a Wendy's executive was at the game and over the PA came the famed announcement that if the Isles reached 10 goals it would be Double Chili for all.  All except Phil Esposito, that is, who made an obscene gesture upon hearing the announcement. Midway through the third period, Garry Howatt and Denis Potvin scored 2:50 apart, raising the Isles' total to ten, and the Coliseum scoreboard told the story. 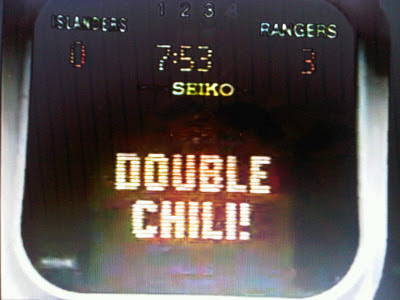 A few years ago, a highlights package was put together on youtube.  The video quality is actually quite good, considering the age.  The highlights are from the MSG broadcast, with the late Jim Gordon and the late Bill Chadwick at the microphones. (Somewhat ironically, the package runs 7:11)
Earlier in the 2011-12 season, the Islanders needed seven games to score ten goals.  In their 10-5 win over the Rangers on November 13, 1979 they did it in 41:29.

When I think of Double Chili, I also think of Jeffrey Bourne, who was born two days before this game in Syosset Hospital.  Bobby missed this game, and this was how his teammates responded.

For more on Jeffrey's triumphs, follow him on Twitter @sledgehockeyguy  and see this story on the Hockey Greats Fantasy Camp.  http://www.kelownadailycourier.ca/local-sports/hockey-greats-fantasy-camp-great-times-greater-impact-71812.html

Postscript: from longtime Isles' voice Howie Rose: "Don't forget my initiation upon taking the Islander job (in 1995)....Once the deal was done, Barbara took me to the Wendy's on Jericho Turnpike off of Brush Hollow Road for a heaping double bowl of Chili. It's actually much better than Skyline Chili in Cincinnati which somehow has achieved iconic status."


Forever1940 is the nom de plume of Eric Hornick, statistician on Islander home telecasts since 1982. Visit my blog: NYISkinny.com and follow me on Twitter @ehornick
Posted by Eric at 7:11 AM