...from the Montreal Gazette's Jack Todd ( Jack Todd (jacktodd46) on Twitter )
Jack Todd: Ho-Sang gets same treatment as Subban from Hockey Canada
If a few years from now the Subban/Ho-Sang parallels continue to be drawn, Isles fans will be very happy.
Forever1940 is the nom de plume of Eric Hornick, statistician on Islander home telecasts since January 21, 1982. Visit my blog: NYISkinny.com and follow me on Twitter @ehornick
Posted by Eric at 10:19 AM No comments:

Can't win for losing: The Skinny on the Draft Lottery change

The NHL announced two major changes to the draft lottery today.
Beginning this spring, the odds have been changed, which increases the chance that a team that finished higher in the standings will win the lottery.
The League published the following chart:
So basically, the last place team now only has a 1 in 5 chance of retaining the top pick, down from a 1 in 4 chance last season.  But remember, if you go back only a couple of seasons the winner could only move up 4 spots, so the chance of the #1 team retaining the first pick was actually 48.2%.
Given the Connor McDavid hype, I guess this makes sense.  It potentially makes first-round draft picks of teams that will miss the playoffs but won't fall to the bottom of the league much more valuable.
The Isles do not currently have a first round pick next spring; it belongs to Buffalo as part of the Vanek for Moulson trade.
The lottery will change further in the spring of 2016 when the top 3 picks will be awarded based on the lottery.  For the first time in the modern era the worst team in the NHL the previous year, having kept its own draft pick, could pick as low as 4th.
Forever1940 is the nom de plume of Eric Hornick, statistician on Islander home telecasts since January 21, 1982. Visit my blog: NYISkinny.com and follow me on Twitter @ehornick
Posted by Eric at 3:18 PM No comments:

Howie on the new owners and the old building

Howie joined Pete McCarthy on WOR's SportsZone to talk about the Isles' ownership news as well as the upcoming final season at the Coliseum.
Howie Rose with Pete McCarthy (Audio)
Forever1940 is the nom de plume of Eric Hornick, statistician on Islander home telecasts since January 21, 1982. Visit my blog: NYISkinny.com and follow me on Twitter @ehornick
Posted by Eric at 10:29 PM No comments:

Check out this profile on Ledecky from The (Harvard) Crimson:
Philanthropist Makes Fortune on 'Rollup' Concept |News | The Harvard Crimson
Contains this:
"In his 25th reunion class report, Ledecky relates how he first became interested in philanthropy. The grandfather of Scott D. Malkin '80, Ledecky's upperclass roommate, told Ledecky as a first-year that he wished he had given away his money earlier, so he could see the fruits of his philanthropy. Ledecky writes that he has taken that advice to heart.
Giving away his money, Ledecky says, "is God's work in a way for me. I think I went through a lot of good stuff, a lot of bad stuff. This last time through I really kind of found myself."
Ledecky, who is single and has no family, has embraced his communities instead.
"The time that I have free, because I don't have a family, I try to spend in the community," he says. "The New York and Washington communities have become family."
Forever1940 is the nom de plume of Eric Hornick, statistician on Islander home telecasts since January 21, 1982. Visit my blog: NYISkinny.com and follow me on Twitter @ehornick
Posted by Eric at 4:06 PM No comments:

The Skinny on Jonathan Ledecky

If the Isles' sale goes through, their new co-owners, Jonathan (although I've seen it numerous times in print as Jon) Ledecky and Scott Malkin will come with quite the pedigree of their own.
Both Ledecky and Malkin are Harvard-educated (undergraduate and MBA).  The Crimson hockey team, FWIW, is coached by ex-Islander Ted Donato.
Ledecky should be media friendly.  After all, he funded not one, but two scholarships at Harvard related to media:
The Berta Greenwald Ledecky Undergraduate Fellowship program, supported by Jonathan J. Ledecky '79, M.B.A. '83, and named in honor of his mother, enables the magazine to appoint two undergraduates to the editorial staff each academic year. The fellows write the "Undergraduate" column that appears in each issue, report and file news stories and short features, contribute to harvardmagazine.com, and learn the workings of a magazine through a broad range of other editorial tasks. Although former fellows have pursued a diverse array of careers, many remain professionally engaged in writing and editing at publications such as The New York Times, The New Yorker, and The Wall Street Journal, in the electronic media, or as authors of books.
Jonathan Ledecky also funds the Jaromir Ledecky International Journalism Fellowship, which is named for his father and supports overseas summer internships in journalism for Harvard undergraduates.
Ledecky is the non-executive Chairman of the Board at Forbes.  You can read more about him here: http://www.forbes.com/profile/jonathan-ledecky/
Forever1940 is the nom de plume of Eric Hornick, statistician on Islander home telecasts since January 21, 1982. Visit my blog: NYISkinny.com and follow me on Twitter @ehornick
Posted by Eric at 3:05 PM No comments:

The Skinny on Scott Malkin (from Women's Wear Daily and others)

https://www.valueretail.com/res/content/documents/2013-WWD-CEO-Summit-Scott-Malkin-jan.pdf
This profile is about 19 months old -- interesting quote from the potential Islander co-owner:
... calling (Marvin) Traub the "Wayne Gretzky of the retailing industry," he noted Gretzky... was "good at ice hockey because he went where the puck was going, not where it had been."
From Value Retail's website:
"Scott Malkin is the founder and Chairman of Value Retail PLC. He also serves as Chairman of S.D. Malkin Properties, Inc. which develops retail, residential and hotel projects in the United States. Scott Malkin is a Trustee of the New York Public Library, and is a Vice Chair of the Urban Land Institute as well as Chair of the Urban Land Institute Europe."
While he has lived in London for over two decades, Malkin is "a graduate of Harvard College, Harvard Business School and Harvard Law School and serves in various roles at Harvard University including on its Global Advisory Committee and the Harvard Stem Cell Institute Advisory Committee."
Forever1940 is the nom de plume of Eric Hornick, statistician on Islander home telecasts since January 21, 1982. Visit my blog: NYISkinny.com and follow me on Twitter @ehornick
Posted by Eric at 2:42 PM No comments:

I have accepted Jiggs McDonald's ‪#‎IceBucketChallenge‬ for ALS.

You have 24 hours! Please also join me in supporting ALS.

Whether you've been nominated or not, click the link and make a donation!Link to donation  Donate here!!!!"


The ALS Bucket Challenge has been sweeping the continent -- and has seen a tremendous amount of support from the hockey community, particularly the Islanders.


and then nominated (among others) Jiggs McDonald


Now, in 32+ years of working on Islanders telecasts I've only worked regularly with two play-by-play men -- Howie and Jiggs. 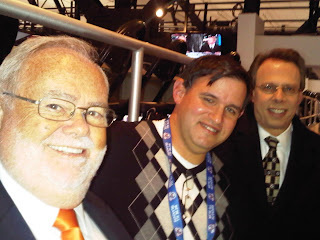 
Jiggs has nominated me (along with Ed Westfall, who worked with Jiggs, and then with Howie).

What will I do?  Stay tuned.


But in the meantime, whether you've been nominated or not, visit ALSA.org and make a donation and help fight this disease.


And here's The Skinny I promised you, according to the ALS Association:

"As of Friday, August 15, 2014, The ALS Association has received $9.5 million in donations compared to $1.6 million during the same time period last year (July 29 to August 15). These donations have come from existing donors and 184,812 new donors to The Association."