"The Skinny" By Eric Hornick Game 49 Isles 4, Rangers 2 Josh Bailey celebrated his 50th Islander-Ranger game with a goal and two a...

The Isles announced today that Thomas Hickey will miss 4 weeks with an upper body injury.  Hickey, who last season became the 12th Islander defenseman to play at least 100 consecutive games, has missed only one game the last two seasons (11/24/14, ending a 103-game streak).
Hickey has played more games in an Islander uniform the past two seasons (163); Frans Nielsen (158) and Matt Martin (157) played the most among forwards over the same span.
The Isles will play 9 regular season games between now and October 27th, which is the 4-week mark.
Posted by Eric at 2:10 PM No comments: Links to this post


Today is September 19th, which makes it a milestone birthday for the Isles' first captain.

Happy 75th birthday to Islander Hall of Famer
Ed Westfall, born on this date in that special year of 19-40. 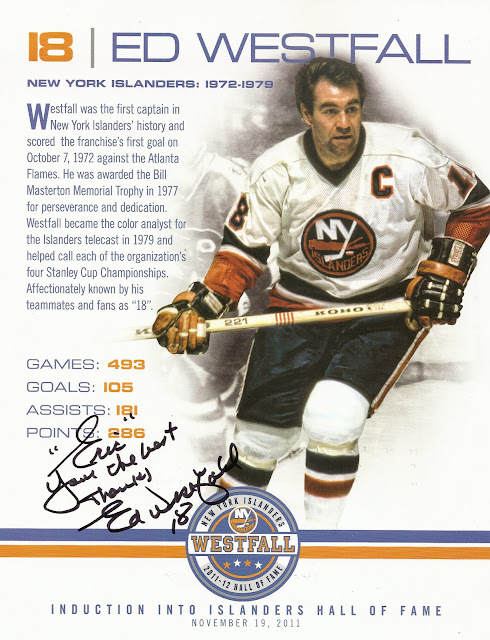 Posted by Eric at 12:00 AM No comments: Links to this post

The Skinny on the very durable Zidlicky

Marek Zidlicky agreed to a 1 year 1.5M contract with the Islanders.  Zidlicky is 38 (approximately 6 months younger than Lubomir Visnovsky) but has proven to be a very durable player recently.

Over the last three seasons, Zidlicky has played 213 regular season games.  The Islanders (and the other 29 teams) have played only 212 in that span -- Zidlicky played 84 games last season: 63 with New Jersey and 21 with Detroit.

Zidlicky will join the list of players who have appeared for both the Isles and Devils.  Zidlicky could have made the three-way (NYI, NYR, NJD) club as he was actually drafted by the Rangers in 2001 (176th overall).  He was traded to Nashville in the deal that brought Mike Dunham (who did play for all three teams) to Broadway.

Should Zidlicky appear in a game after October 16th he would be the oldest defenseman to play in a game for the Islanders.  (Steve Staios was 38 years, 254 days in his final NHL game -- 1 day older than Lubo was when he was injured in game 4 vs Washington last spring)

Forever1940 is the nom de plume of Eric Hornick, statistician on Islander home telecasts since January 21, 1982. Visit my blog: NYISkinny.com and follow me on Twitter @ehornick
Posted by Eric at 9:17 PM No comments: Links to this post