Game 3
Isles 7, Buffalo 4
Bryan Trottier scored two second period goals to break a 2-2 tie as the Islanders moved within one win of the Stanley Cup Final with a 7-4 victory over Buffalo as the Isles grabbed a 3-0 lead in the series. It was the Isles’ 11th straight playoff win over the Sabres (one shy of the NHL record against a single opponent). 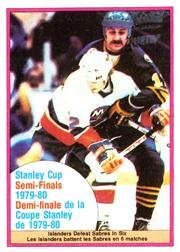 Mike Bossy and Wayne Merrick had scored first period goals to give the Isles the lead but a late goal by Tony McKegney cut the advantage in half before the period was over.  After Gilbert Perreault tied the game at 8:12 of the 2nd period, Trottier needed just 45 seconds to restore the Isles’ lead.  He then added a power play goal with 1:34 left in the session.

Lorne Henning and Bob Bourne scored in the first 8 minutes of the third to make it a 6-2 lead but the Sabres weren’t quite done yet, scoring twice in 58 seconds to cut the lead to 6-4 before Butch Goring cemented the win into an empty net.

Mini-Skinny:
The Isles outshot Buffalo 40-33....  Billy Smith improved to 10-1 in the playoffs while Don Edwards took the loss... The win was the Isles' tenth in the playoffs (10-2), breaking the then-club record set in 1975.... It was only the 2nd time that the Isles had moved within one game of the Cup Final, having forced Philadelphia to a seventh game in 1975.

Isles +/- Leaders thru 11 Games (When you think about a team where everybody played a role, look at all of the guys +8!)
Bryan Trottier +9
Garry Howatt +8
Dave Langevin +8
Gordie Lane +8
Bob Lorimer +8

The Isles had a 3-0 lead in the semi-finals for the first time in their history.
“We’re one game away from the final; everyone knows that. If we do it in four, then we can sit back and relax”, Denis Potvin told the NY Times’ Parton Keese. “But there’s still one more game, don’t forget it.”