It Happened at the Coliseum … on MAY 12th

22 years ago tonight (1993) – Steve Thomas scored two goals, including the game-winner at 10:32 of the third period, as the Islanders evened their best-of-7 Patrick Division final with the Penguins at 3 games each, with a 7-5 victory.

Brad Dalgarno scored just 25 seconds into the game to give the Isles the lead but future-Isle Martin Straka tied it 6 minutes later.  The deadlock didn’t last long as Derek King gave the Isles back the lead just 32 seconds after Straka’s goal and it remained 2-1 through the first intermission. Steve Junker, playing his first NHL game in place of an injured Pat Flatley, assisted on King’s tally.

A wild second period featured five goals.  Mario Lemieux tied the game early in the period, but power play goals by Ray Ferraro (his 12th of the post-season and Thomas gave the Isles a 4-2 lead. Goals by Straka and Kevin Stevens evened the game through 40 minutes.
Brian Mullen gave the Isles the lead for good, at 5:42 of the third, and Thomas then restored the 2-goal advantage five minutes later.

"We read a quote from Kevin Stevens that they were going to finish us off tonight," Thomas told Newsday’s Jeff Williams. "We wanted to prove him wrong."

Stevens’ second goal, with 2:32, brought the Champions back within one, before Uwe Krupp hit the empty net to cement the win.  (Remember it was Krupp’s overtime goal three years earlier (for Buffalo, vs. Pittsburgh) that had knocked the Isles into the playoffs and put the Penguins in a position to draft Jaromir Jagr.)

"I'm certainly proud of each and every one of them," Al Arbour said . "It's pride, individually and collectively as a team. They don't want to let each other down. They'll do anything to win."

If Islander fans remember Darius Kasparaitis for one particular game, it is probably this one as his heavy hitting got the Islanders, and the crazy Coliseum crowd excited throughout the game.

"Big guys are easier to hit", Kasparaitis explained to Newsday’s Joe Gergen.”You see a big body and you can't miss…Maybe somebody think I'm crazy. But this is hockey. If I can hit a player like Martin Straka {then a Penguins rookie}, I can hit Lemieux. My teammates tell me to hit everybody."

The win sent the series back to Pittsburgh for a deciding Game 7 – one that would make David Volek an Islander legend.

Here's the SportsChannel broadcast, with Jiggs and Eddie on the call.

If you go almost to the very end (about 2 hours 44 minutes in), you'll see a feature with a familiar title: The Skinny. 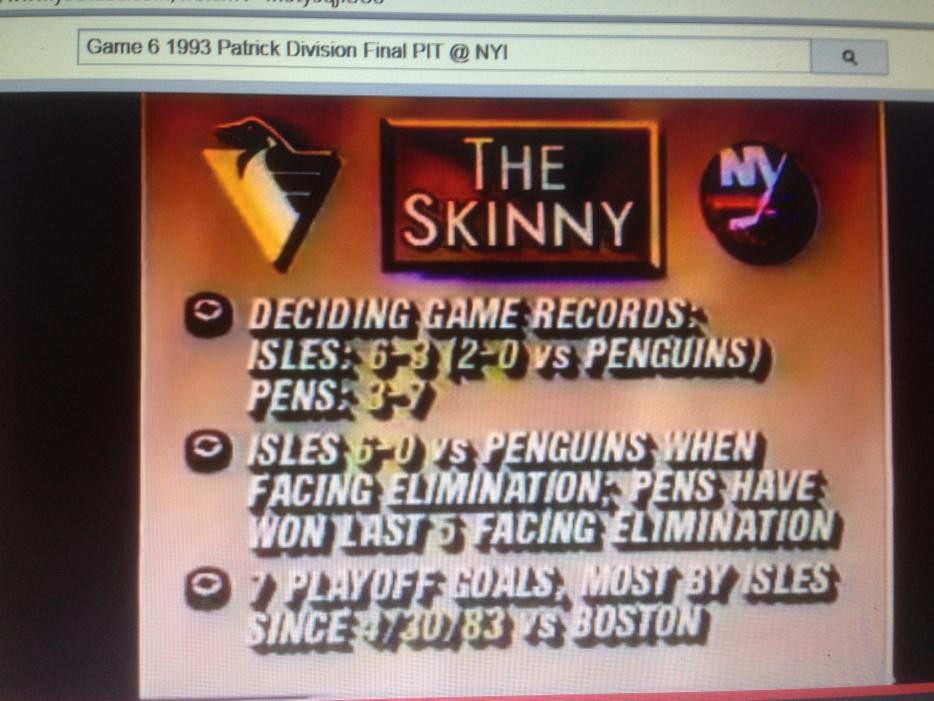 Click the link for Steve Thomas in an interview  after the first period with Scott Russell on Hockey Night from the first period -- Thomas is asked about a "Winning is Fun" sign -- a phrase you see me repeat from time to time: https://pbs.twimg.com/media/CEc6t1MUgAAyN8E.jpg:large

Also on this date: (1984) In the final home game the Isles played as Stanley Cup Champions, Clark Gillies had his only playoff Hat Trick as the Isles pounded Edmonton 6-1 to even the Stanley Cup Final at 1-1.  The series would then switch to Alberta for game 3, 4, and 5 – Edmonton would win all three, short-circuiting the Islanders’ Drive for Five.

Also on this date: (1981) Anders Kallur and Wayne Merrick each scored twice, as the Islanders defeated Minnesota 6-3 in Game 1 of the Stanley Cup  Final. Both of Kallur’s goals were scored in the first period; his second goal was the second one that the Isles scored while killing a major penalty for spearing to Bob Bourne.


All-time, the Isles played three playoff games on May 12th at the Coliseum; they compiled a 3-0 playoff record on this date at 1255 Hempstead Turnpike in Uniondale.
Posted by Eric at 7:40 AM