It Happened at the Coliseum … on MAY 8th

33 years ago tonight (1982) – I can remember Larry Brooks’ Stanley Cup preview as if it was written yesterday. “The only question is can (Richard) Brodeur steal a game. The answer: no. A sweep.” 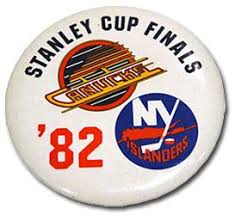 The closest the Canucks game to stealing a game was in game 1, but Harold Snepsts’ giveaway with two seconds to play in overtime ended up on the stick of Mike Bossy and Bossy beat Brodeur for a 6-5 win.

Bossy’s goal was actually the second goal in that game that the Islanders scored in the final 10 seconds of a period, as Denis Potvin had scored a power play goal that gave the Isles a 3-2 lead after 20 minutes.

Potvin’s 2nd power play goal of the game (and the Isles’ 3rd), early in the 2nd period made it 4-2 Isles but goals by Stan Smyl and Ivan Boldirev knotted the game before the halfway mark. The second half of the period feature two big fights, one between Duane Sutter and Darcy Rota, the other between Bob Nystrom and Stan Smyl, but no other goals.

Jim Nill scored with just under 7 minutes to play to give Vancouver a 5-4 lead, but Bossy tied the game with 4:46 to play with his 12th goal of the post-season.

This was 5 years before the term “Easter Epic” came into vogue, but I can vividly remember holding up an index card to Jiggs that read “It’s Midnight in the East; Happy Mother’s Day”.

With time running out in the first overtime, Snepsts inexplicably put the puck on Bossy’s stick when he could have just killed the rest of the period and Bossy put it by Brodeur for the winning goal.

In 1998, after Vancouver was awarded the All-Star Game, Snepsts and Tiger Williams recalled the winning goal for the NY Times’ George Vescey:

''I was on the ice,'' Tiger Williams recalled. ''I could hear Bossy behind me. I knew he was there. I yelled, 'Hold it, hold it.' But Harold let it go, (Bossy intercepted, and) made an incredible shot. It didn't go off somebody; it found a hole.''

''Then I went into the locker and I cried like a baby,'' Snepsts said.


If you want to see just the winning goal, it's here:

Bossy described the winning goal in this interview with Len Berman, then with CBS-2:

Also on this date: (1993) The only other May 8th game in Coliseum history also ended with a dramatic 6-5 Islander win, this time over Pittsburgh to even the Patrick Division Final series with the Penguins at 2 games each.

This is the famed “Tom Fitzgerald game” as Fitzgerald became the first player in Stanley Cup history to score two shorthanded goals on the same penalty (one late in the first period and one early in the second period) – ironically he should have been the player penalized but Claude Loiselle ended up in the box.  Each team scored four goals in the third period; Derek King’s second goal of the session was the final goal of the game and gave the Isles a 6-5 lead with 7:49 to play.  (All 11 goals were scored in an 18:59 span of the 2nd/3rd periods).

Here are the highlights (from the Penguins' broadcast with Mike Lange & Paul Steigerwald) that aired on TSN some years ago.


All-time, the Isles played two playoff games on May 8th at the Coliseum; they compiled a 2-0 playoff record on this date at 1255 Hempstead Turnpike in Uniondale.
Posted by Eric at 7:40 AM