It Happened at the Coliseum … on FEBRUARY 14th 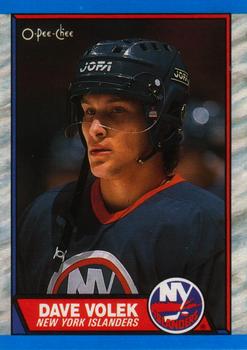 Pat LaFontaine had a pair of goals for the Isles, giving him 30 goals on the season.  Brad Dalgarno had the only goal of the first period, while Randy Wood added an insurance goal for the Isles.

It was the rookie Volek’s seventh game winner, five of which had come in the third period. That established a team record for rookie game winners, which was later tied by Trent Hunter.  Anders Lee recorded his 6th game-winning goal on Thursday and is just one behind Volek and Hunter.

"Sometimes it's a coincidence," Al Arbour told Newsday’s Sherry Ross, regarding certain players' abilities to come up big. "But he's out there every shift, and the harder you work, the luckier you get. You make things happen."

Volek would record only four other game-winning goals in his (regular season) career.  But about 4 years and three months later, Volek would make something else happen – the dethroning of the Stanley Cup champion Penguins.

I don't have any video of this 1989 game, but the full game 7 in 1993 is circulating on YouTube.  Jiggs/Eddie's entire call is here; skip to about the 2 1/2 hour mark to see the play leading up to the last series winning goal in Islander history...at least for another couple of months!


Also on this date: (1978) – Bryan Trottier scored the winning goal with 9:10 left in the game as the Isles rallied from a 2-1 deficit to defeat Los Angeles 3-2.  Butch Goring had a goal for Los Angeles.

All-time, the Isles have played eight February 14th games at the Coliseum and have compiled a 2-4-2 record on this date at 1255 Hempstead Turnpike in Uniondale.  The ninth and final February 14th home game is tonight –as the Isles host Columbus at 7:00. Make sure you’re there, because after tonight, there are only 15 regular season games remaining.