It Happened at the Coliseum … on OCTOBER 12th

Germain Gagnon scored the winning goal with 69 seconds to play, beating Rogie Vachon.  Billy Harris was stopped on the first penalty shot in Islander history, but later scored two goals, giving him three in his first two NHL games.  Bob Berry had both goals for Los Angeles but former King Billy Smith stopped the other 28 shots to record his first win as an Islander.  Smith would go on to win 305 regular season games, all but one of them for the Isles.

Tim Moriarty’s Newsday story noted that the Isles were tied in the standings with the Rangers and ahead of the Stanley Cup Champion Bruins.  Islander coach Phil Goyette commented: “I hope it’s not short-lived”.  It was.  But for the 9,427 in attendance they had a claim that nobody could deny – they saw the first win in Islander history.

One of those was a young fan named Larry Levy, who recalled:


It was a close game and it was tied at 2 with about a minute to go.  Gagnon got the puck in the neutral zone and made a move on both Kings' defenders and somehow split between them.  You used to see that move a lot more than you do now, where more players try to go to the outside in today's NHL.  And I think that one of them was Marrotte, who later went to the Rangers.  I distinctly remember Gagnon roofing the puck over (Rogie?  Pretty sure it was Rogie), who came sliding out to try to make the save.  Place went nuts and since they were at .500, I was thinking maybe they wouldn't be that bad.  Wrong.  I remember next day's Newsday article began by saying "Many years from now, 100,000 people will swear they were at the Coliseum to witness the Islanders' first win.  But only 8,000 would be telling the truth."  Or something like that.  My mother ultimately threw out the ticket stub. However, I still have the program (orange cover with Snoopy and Woodstock)  with the Islanders' and Kings' rosters.  Pretty sure Arnie Brown was on that team.  And Westfall and Harris.

The crowd was announced as 9,427. It was slightly inflated, but as the years roll by there will probably be at least 99,427 people who will claim they were at the Nassau Coliseum the night the Islanders won their first National Hockey League game. 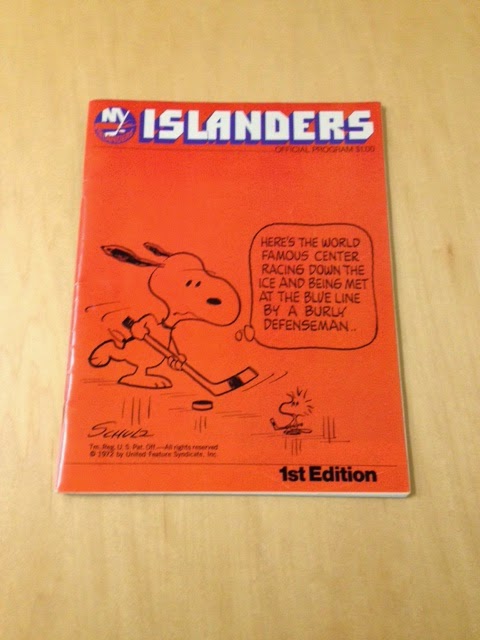 All-time, the Isles have played seven October 12th games at the Coliseum and finish with a 5-2-0 record on this date at 1255 Hempstead Turnpike in Uniondale.
Posted by Eric at 7:40 AM