It Happened at the Coliseum … on OCTOBER 4th


17 years ago tonight (1997): The earliest date for the Islanders to ever win a home game was October 4th, back in 1997, as the Islanders blanked the Toronto Maple Leafs 3-0.  Tommy Salo became the third Islander goalie to record a shutout in the season opener, as he made 26 saves. 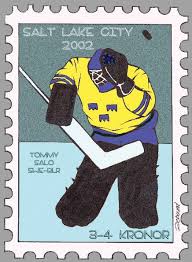 Sergei Nemchinov gave the Islanders the only goal they needed, against former mate Glenn Healy, early in the second period.  Claude Lapointe scored the other 2 goals for the Islanders – one of 12 career two-goal games for Lappy.


"That wasn't as pretty as we would have liked to have seen it," coach Rick Bowness told Newsday's Jim Smith. "But it was effective." The Isles improved to 1-0-1 on the season after an 0-6-0 pre-season.

All-time, the Isles played one October 4th game at the Coliseum, and finish with a 1-0-0 record on this date at 1255 Hempstead Turnpike in Uniondale.
Posted by Eric at 7:40 AM