Today is September 19th, which makes it a milestone birthday for the Isles' first captain.   Happy 80th birthday to Islander Hall of F...

It Happened at the Coliseum … on OCTOBER 11th


39 years ago today (1975): Glenn Resch recorded a shutout in the home opener, but that was far from the biggest story. Rookie Bryan Trottier made his Coliseum debut a most memorable one, scoring three goals and adding two assists in a 7-0 blanking of the Los Angeles Kings. It was the first time in Islander history that players recorded a hat trick and a shutout in the same game.

“It’s probably the most I’ve been applauded in hockey”, said Trottier – but that would certainly change in the months and seasons to come. His three goals and five points tied Islander rookie records that remain today.

An hour or so after the game, a new television program premiered on NBC.  It was a Saturday Night and it was Live: 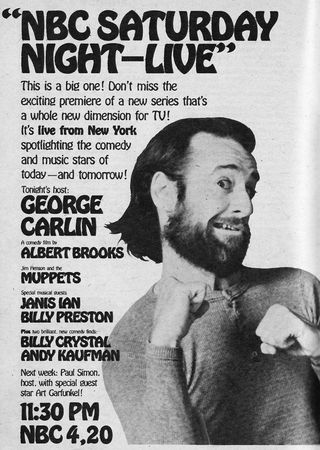 Anyone know what happened to that show?

Also on this date: (1980 and 1983): The Isles raised two Stanley Cup banners on this date, before 5-2 wins over Boston and Los Angeles, respectively.

Here's a view of the 4th Banner raising -- it's from the Kings' telecast.  Bob Miller and Nick Nickson, who today are the TV and radio voices of the Kings, provide the commentary.


All-time, the Isles have played six October 11th games at the Coliseum and have compiled a 5-1-0 record on this date at 1255 Hempstead Turnpike in Uniondale.  The seventh and final October 11th home game is tonight – the home opener of the final season of the Coliseum era as the Isles host Carolina in the back-end of the season-opening home and home series. Make sure you’re there, because after tonight, there are only 40 regular season games remaining.
Posted by Eric at 7:40 AM