It Happened at the Coliseum … on NOVEMBER 7th

14 years ago tonight (2000) – Brad Isbister scored both goals and John Vanbiesbrouck made 32 saves as the Islanders defeated the Nashville Predators 2-1.

The game was played on Election Night (Bush v Gore) and one of the highlights of the night was not seen by the sparse crowd in attendance. 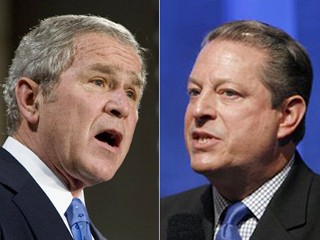 During his play-by-play, Howie Rose (with the help of his statistician) interspersed Election returns.  “Puck cleared to center ice… Bush wins Georgia … stopped by Vanbiesbrouck as Gore claims Maine”.  It was a strange night!

The win improved the Isles record to 6-4-2-1, moving the team into a tie with New Jersey for the Patrick Division lead.  As Alan Hahn related in Newsday, and according to the Elias Sports Bureau, it was the first time the Isles had a share of first place this late in the season since Feb. 18, 1995, when they were tied with the Rangers at 14 games of the lockout- shortened season. (Neither of those seasons ended well; the Isles finished 15-28-5 in 1995 and 21-51-7-3 in 2000-01)

Also on this date: (1992) – Pierre Turgeon became the first Islander to score on a penalty shot in nearly 15 years but Doug Crossman, making his Coliseum return, scored in overtime to complete a hat trick, and give Tampa Bay a 6-5 win over the Isles in the first game ever between the teams.  Crossman finished with six points -- the only six point game in Lightning history.

All-time, the Isles have played eight November 7th games at the Coliseum and finish with a 4-4-0 record on this date at 1255 Hempstead Turnpike in Uniondale.
Posted by Eric at 7:40 AM