It Happened at the Coliseum … on APRIL 24th

13 years ago tonight (2002) When you think of the most memorable moments in Isles history, so many of them have one thing in common, the voice of Jiggs McDonald.  Bossy’s 50 in 50, the 15th straight win, the 1982 comeback over Pittsburgh, the overtime game won by Morrow in 1984, the Easter Epic, Ferraro’s OTing the Caps, and Volek dethroning the Champs, oh and oh yes, the last three Stanley Cups, all have Jiggs’ voice associated with it.

The only comparable moment Howie Rose has had behind an Islander microphone occurred 13 years ago tonight, when Shawn Bates scored the penalty shot goal against Toronto that gave the Isles a 4-3 win and a 2-2 tie in the series.

Here’s an excerpt from my write-up that night: 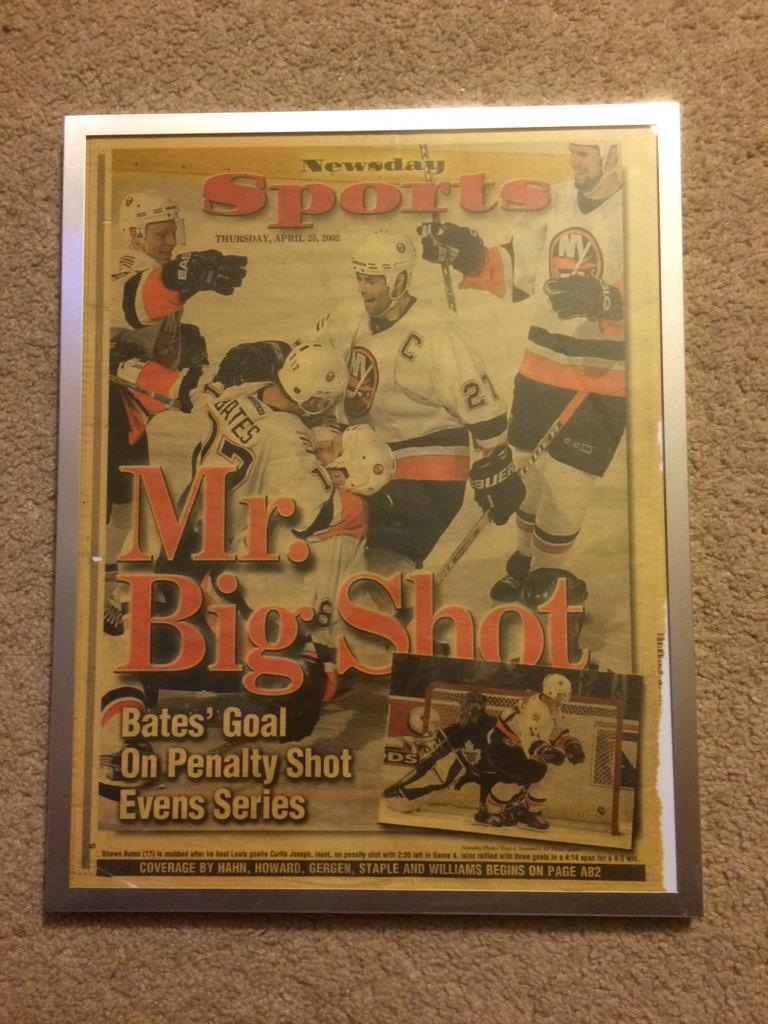 Having watched and listened to some 2000 Islander games over the past 30 years, I have seen some pretty remarkable things, but Wednesday night’s 4-3 victory over Toronto might have to make the Top 10.

The Isles rallied from a 2-1 deficit to defeat the Leafs in a game capped off by the first successful penalty shot in an Islander playoff game. Two Islanders and four opponents had tried before --all had failed. Shawn Bates didn’t, scoring his 2nd goal of the series with just 2:30 to play, capping a wild 4:14 stretch as the Isles defeated the Leafs.

Alexei Yashin finally broke the 13-game goal-less schneid that had been with him in playoff games since May 11, 1998 when he opened the scoring in the first period. [Yashin who would add an assist later, now leads all players in the series with 5 points, after having just one in his last two playoff-years. Mark Parrish & Adrian Aucoin earned assists on the opening goal.

The Isles tied the game at 13:16 of the third, with Toronto’s Pilar in the penalty box for tripping, on Kip Miller’s first goal of the series. It was Miller’s third career Cup goal, with the previous two coming in 1999 for Pittsburgh. Czerkawski and Jonsson set him up as the Isles connected on the power-play for the 6th time in the series.

One hundred seconds later, the Isles took the lead on Roman Hamrlik’s first-ever playoff goal. Playing in his 29th game, Hamrlik took a pass from Yashin and blistered one by Joseph.

Shayne Corson tied the game 98 seconds after that, scoring from behind the goal, as Chris Osgood lost track of who had the puck.

That set the stage for Bates’ heroics, as he did what Denis Potvin [1983 vs. Washington] and Randy Wood [1990 vs. Rangers] failed to do, convert on a penalty shot. Bryan McCabe pulled Bates down on the left wing side and Referee Brad Watson unhesitatingly pointed to center ice for hockey’s greatest moment. Having looked at several replays, it appears to have been the correct call--which I did not really believe when looking at it live.

Pat Quinn, who coached the Flyers in 1980, when a Leon Stickle missed off-side call contributed to a goal in the Cup-winning game disagreed.

Following the mass hysteria that accompanied the lead goal [as well as the entire third period], the Islanders then held the Leafs off; Kenny Jonsson was hit with the Isles second phantom penalty of the period. The game ended with a mob in front of Chris Osgood. Toronto’s Tie Domi later received a Gross Misconduct for his actions at game's end, but I think that had more to do with his displeasure at the potential series-turning call.

So the Isles hold serve, and for the first time since the 1993 Patrick Division Championship series, they have reduced a best-of-7 to a best-of-3, with game five in Toronto Friday.

It's the third time in Islander history that they've lost the first two games of a best-of-7 series on the road and come back to win the next two at home [1976 vs.Buffalo and 1984 vs. Montreal].

The Isles won playoff games on consecutive nights for the first time in 17 years, since beating the Capitals in games 3 and 4 of the 1985 Patrick Division Semi-Finals. The Isles, who trailed that series 2-0, would win that series in 5 games.


Here's the edited full game replay from Hockey Night In Canada, with Bob Cole & Harry Neale. (The penalty shot sequence starts at about 43:20)


Also on this date: (1993) Ray Ferraro scores an overtime goal for the 2nd straight game (really third) as the Isles rallied from a 3-0 deficit for a 4-3 victory. Ferraro’s goal, at 5:40 of the second overtime, ended the longest game in Coliseum history and gave the Isles a 3-1 lead in the series.

Here's some highlights of the win, with Jiggs and Eddie.  It was the Isles' last OT win at the Coliseum until John Tavares won game 3  vs. Washington earlier this week.


Also on this date: (1975)  The Isles evened their series with Pittsburgh at 3 games each with a 4-1 win on Coliseum ice. Garry Howatt broke a 1-1 tie for the winning tally late in the second period; the score remained the same until the Isles hit the empty net twice in the final minute. Chico Resch made 31 saves for this win.

Two nights later, Resch kissed the goalposts and later kissed the Penguins goodbye, as the Isles became the first professional sports team in 33 years to erase a 3-0 deficit and win a playoff series.


Here's a little feature on the series:


All-time, the Isles have played one regular season and five playoff games on April 24th at the Coliseum; they have compiled a 1-0-0 regular season and 3-2 playoff record on this date at 1255 Hempstead Turnpike in Uniondale.
Posted by Eric at 7:40 AM